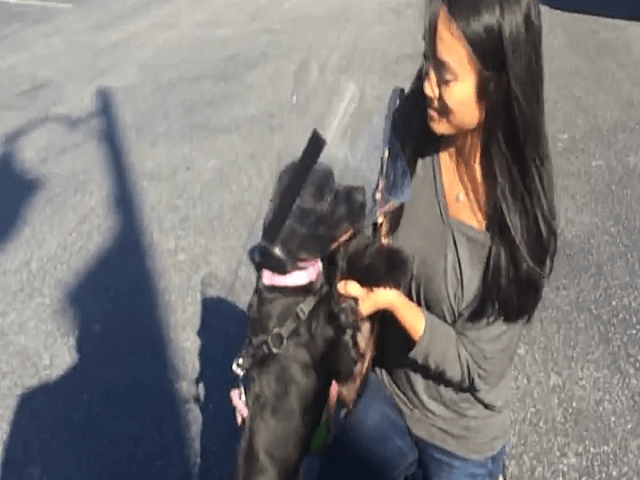 We often forget how much of a privilege it is to have our sight. In fact, we get so caught up in the stresses of day-to-day life, that sometimes it seems impossible to remember to be grateful for the small things. Having the vision to be able to see all of the beautiful things that we encounter every day is truly a blessing.

So when one blind dog received surgery to help her see for the first ever time, she simply couldn’t contain her joy.
Holly and her partner, Bart Emmerson, were considering adopting a pet from their home in Canada when they first heard about a rescued black cocker spaniel. The dog had been discovered roaming around Olive Street in Los Angeles, and Bart and Holly were instantly taken to her.
California isn’t exactly down the road from Canada, but as luck would have it, the couple had a friend from that area who was more than willing to fly the dog to Vancouver so Holly and Bart could adopt her. Friend of the year!

The dog, who the couple aptly named Olive, had just one problem- she was blind.
Olive had severe cataracts in both of her eyes, meaning that she could barely see anything. She wouldn’t even be able to take in the sight of her loving owners as they collected her from the airport. But Olive had the positive, happy-go-lucky spirit of just about every other dog, and she never let her condition get in the way of her living her life.
It broke Holly and Bart’s hearts to see their beloved dog struggling with her sight, and after a vet advised that the pooch could have the cataracts removed through surgery, they willingly agreed. If there was a chance of her being able to see again, then they were willing to take it!

Was Olive finally going to be able to get her sight back?
Thankfully, Olive’s surgery was a success, and as soon as they were able to do so, the couple jumped into the car and made their way to the vets. This was going to be a special moment for all of them – the moment that Olive would be able to see her loving owners for the first-ever time.

It was going to be a tear-jerker.

Holly and Bart documented Olive’s first few moments with her sight back, and it’s a joy to watch! Everything is new and unfamiliar to her, and it’s a lot to take in. She’s clearly a little nervous, and sometimes even hides behind Holly’s back when she sees something a little unfamiliar. But in no time at all, her confidence grows.

Heart-breakingly, Olive’s newfound sight was only temporary- and she went back to being blind a few weeks after that.

Tragically, the poor pooch developed glaucoma a few weeks after the surgery. It seemed that her eyesight just wasn’t meant to be. It was so painful for her that the couple had no choice but to agree to a surgery in which Olive lost both her eyes. But still, the sweet dog never lost her happy spark.

She had been through a lot- but still came out smiling.

The couple have since moved from Canada to Spain, so Olive now enjoys a new way of life in one of the European sunshine hotspots. While her eyesight was short-lived, we’re sure that Olive was truly grateful to her mom and dad for giving her the opportunity to see the world for herself- even though it wasn’t for long. 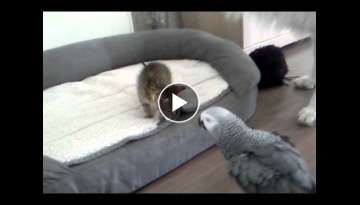 Giant Dog Wants To Play With Baby (Cutest Video Ever!!) The Kitten who doesn't want to leave the Golden Retriever! Introducing New Kitten to the Dog 10 Most Illegal Dog Breeds in the World